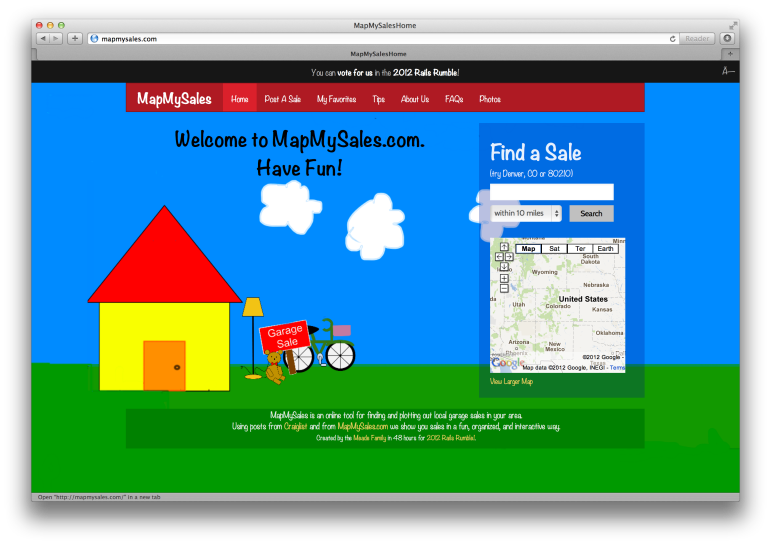 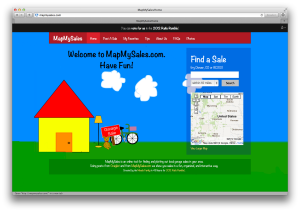 For Rails Rumble 2012 we made MapMySales.com. Here’s the About Us that the kids wrote:

“Made in 2012 by a team of four people (and their special forces monkeys), MapMySales was originally designed as an entry for the 2012 Rails Rumble. What you see today is the product of 48 hours of non-stop, caffeine-fueled programming and design. Enjoy!

Scott Meade, leader of the team and owner of Synap Software, is both a husband and a father of two. He works on most of the behind-the-scenes, complex, technical stuff and is the main component in the MapMySales Project.

Karen Meade, Scott’s wife, helped to create many of the graphics for MapMySales and offered general creative input into the project.

Rachel Meade is a 10 year old who worked on overall graphics and design, loves the ocean, and loves to sing. She has a pet guinea pig named Darwin, a frog named Zino, and a baby betta named Nate. Rachel’s favorite animal is the sea turtle. She ejoyed making MapMySales.com.

Jonathan Meade, 14, is the only son of Scott and Karen. He worked on User Interface and the HTML behind MapMySales.com.

The Meade family works together and that includes their yellow lab Zanna, their fish Goldie, and the other pets. They love having fun together, hanging out with friends, and going on trips. The Meades always work as a team especially when making MapMySales.com! :)”

One thought on “Rails Rumble!”