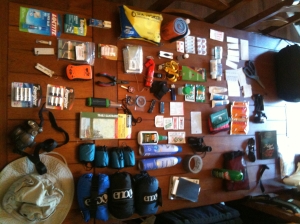 Elimination is the clearest path to simplification. Less is more, and all that. Yet elimination does not equal simplification. For example, some of the most fun things in life may be free, but they are also more fun with the right gear.*

Another example: Relationships with friends and family are complex. Yet the complexity that sometimes accompanies healthy relationships is part of the bargain that’s acceptable even when being purposeful about simplifying life.

Sometimes adding stuff can lead to simplicity. For example, the logistics of shuttling kids and managing our personal schedules would be simplified if we had a second car. The gear we obtained for our Boundary Waters trip made for fewer hassles on the trip. Simplification by addition.

So, don’t just get rid of stuff and feel like it’s making things simpler.Don’t let “simplifying” your life cause you to pass up great hobbies or experiences. Sometimes the stuff (e.g. friends and gear) are worth the hassle and sometimes adding more stuff (e.g. tools like a second car) can lead to simplicity elsewhere.

* Minimalist who brag about owning only a dozen items are missing the point. They still use a lot of things. It’s just that they use someone else’s furniture, dishes, transportation, and gear. Either by renting, borrowing, or mooching – some extreme minimalists don’t necessarily use less or consume less.